How Long Does Crystal Meth Stay in Your System?

If you’re a crystal meth user, one of the many questions you have is how long does crystal meth stay in your system?

There is any number of reasons you are asking this. For some, it is a drug test you have to take for a job and are afraid it is going to be detected.

Another person might be an athlete, who wants to compete, but knows they can’t with any traces of drugs in their systems.

Then, there are the more severe cases.

Those who are under probation, are incarcerated, or are otherwise dealing with criminal/legal matters, and can’t use drugs.

So, whether you are a first time user, or are a drug abuser, you will want to understand the different types of traces, how they affect your body, and how they are found in your system, for any set duration of time.

How Long do Traces of Crystal Meth Remain in Your System?

In answering this question, the first thing is to determine where the testing is being done. For example, it can be tested by blood work, saliva testing, hair follicle testing, or other special testing methods used by probation officers or law enforcement.

So, determining the duration at which the crystal meth is going to remain in your system, first requires a determination of how the testing is going to be administered.

This is one of the most advanced methods to test for traces of crystal meth in your system; for this reason, it is one of the least used (for everyday testing) and it is also one of the more expensive methods for the testing to be conducted as well.

With this type of test, crystal meth can be traced in a user’s system, for up to 90 days after they use it (up to three months).

For professional athletes, those who are incarcerated, or an individual who is on probation, this is going to force you to really think about whether it is worth using the drugs, as they can be traced for such a long period of time after it is used.

A routine blood test to check for traces of crystal meth in a user’s body can typically check for anything in the system for one to three days after the drugs are used.

This is one of the most common methods that are used for checking for drugs in a person’s system.

The reason is that it is one of the cheapest and it is one of the most readily available. But, it also comes with the drawback that it is not advanced, nor can it trace drugs in a user’s system, for as far out as some of the other, more advanced forms of testing can.

This is another one of the commonly used methods to check for traces of crystal meth, or other drugs, in a user’s system.

For regular use, it can find traces for a period of one to four days after use. A urine test, however, is more advanced than blood or saliva, in that it can trace heavy use of crystal meth, for a period of up to one week.

So, although it is not as advanced as the hair follicle testing, it does stretch out a bit longer than some of the other alternatives. If testing for work, sports, or other reasons, this might be a good option for testing, over blood or saliva tests.

Below, we share an insightful infographic detailing the information above but in a fun and graphical format: 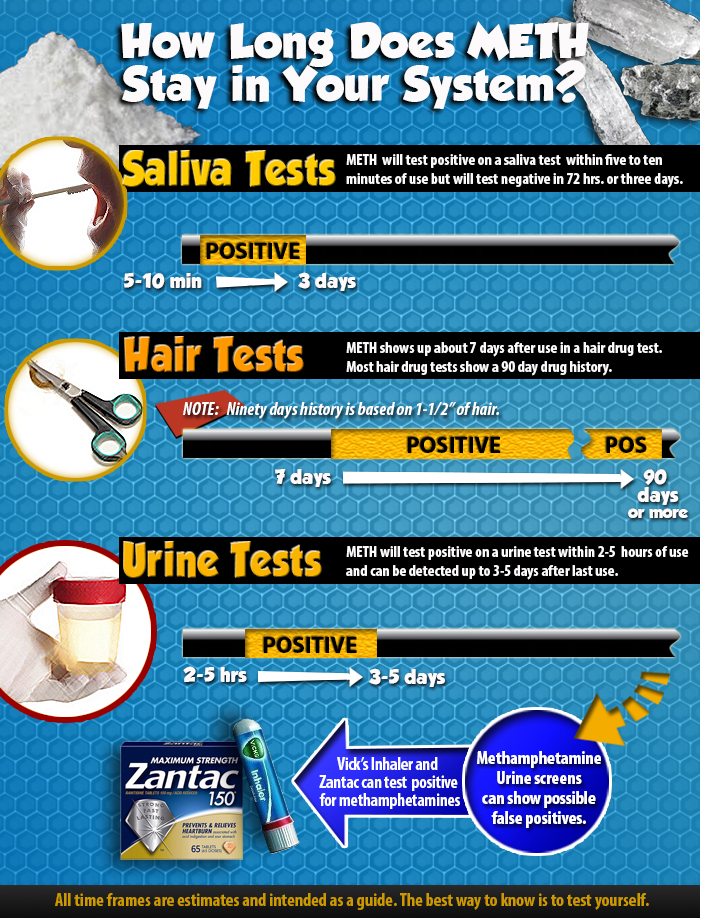 When is Each Form of Testing Used?

The answer to this question is just as varied as the answer of how long does crystal meth stay in your system? It will depend on several variables, including

Of course, the results are also going to vary, just as much as the costs do. The reason being is that some forms of testing are far more advanced, and are more accurate than others.

When testing the use of crystal meth, and other drugs, law enforcement is typically going to use the most advanced methods that are available. Today, this is likely going to be the hair follicle testing, as well as any new advances in DNA testing or sample testing methods available.

This form of testing might also be used in a centre for drug and alcohol abuse treatment. It is the most advanced, so it is also a good way to ensure those who are going through rehab, or those who are finished and are trying to stay clean, are no longer turning to drugs once they have finished their stint in rehab.

The primary drawback of this method is the high cost that it entails completing a hair follicle test.

These are frequently used in the employment arena. The reasons for this are that they are the cheapest methods to check for crystal meth or to check for any other types of drugs a potential applicant might be using.

This type of testing for drug use is also readily available. This means it can be done in virtually any lab, and it does not require any special equipment or technologies, in order for the tester to administer this type of drug test to those who come in for them.

They are affordable, they are readily available, they are easy to use, and they are going to deliver answers to an employer in a very short period of time. This type of test is also frequently used for people who are already working for a company.

If an employer thinks an employee is using drugs and they shouldn’t be, an employer can request that the individual take a drug exam. This is a good testing method in these cases, as it won’t give the individual any time to try and clear the drugs out of their system.

A final form of testing is urine testing to find traces of crystal meth, or other drugs in a person’s system. This is a bit more advanced than saliva and blood testing. It might be used when testing athletes to see if they are illegally using drugs to help them enhance their performance.

In some cases, for higher ranking positions, it might also be used and administered by an employer, to ensure they are not hiring a person who has drug problems or is using drugs at the time of hire.

It isn’t, however, capable of detecting any traces in the user’s system, for a period of more than one week. So, it is not as advanced as hair follicle testing when searching for any traces of drug use.

Drug testing is a very common practice today in many professional arenas. It is used by sports teams, employers, it is used by prisons, judges, probation officers, and even by parents, to find out if their children are using drugs.

The type of testing that is administered, however, is going to vary based on the reasons the tests are being given.

When checking if there are traces of crystal meth in a person’s system, each drug test can provide different results and false readings. These are some of the most common types of testing methodologies that are used today, and the accuracies at which they are going to provide the results when trying to see if an individual has been using crystal meth.