The Benefits of the Paleo Diet for Addiction Recovery 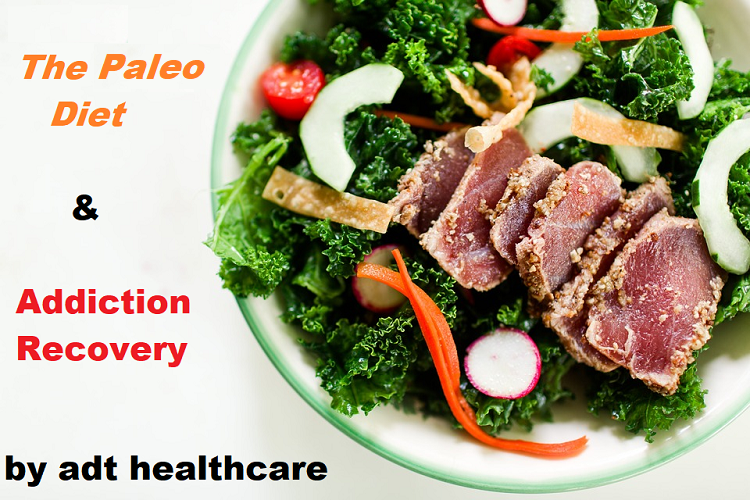 You may wonder what exactly is the Paleo diet. In a nutshell, when you follow the Paleo diet, you must only consume those foods that were available during the Palaeolithic era.

Foods you can eat on the Paleo diet include vegetables, nuts, seeds, fish, lean meats and fruits.

All of these foods actually existed during the Palaeolithic era. Agriculture arrived much later. Thus, you are not permitted to eat grains, legumes and dairy products on the Paleo diet.

The objectives of the Paleo diet

The idea behind the Paleo diet is to consume unprocessed foods that early humans consumed. Supporters of the Paleo diet argue today’s diet is not genetically suited to the human body.

This idea is known as the ‘discordance hypothesis’.

When farming techniques advanced over the centuries, the food types consumed by us humans also changed. The rate this change occurred far outpaced the rate in which our bodies are able to adapt to the new digestive demands of these foods.

And, undoubtedly, this is a key reason why chronic conditions such as diabetes, heart disease and obesity have arisen.

Foods you may eat on the Paleo diet

Foods you can eat if you decide to take up the Paleo diet include:

Foods you want to avoid eating on the Paleo diet

Foods you cannot eat if you decide to take up the Paleo diet include:

Benefits of the Paleo diet for those in addiction recovery

It’s undeniable the Paleo diet is a healthy and well-balanced diet. You cut out all processed carbs and fats, and that can only be a good thing. Sticking to the Paleo diet goes hand-in-hand with a sober, healthy and active lifestyle.

Some even go as far as to argue the Paleo diet helps to ease cravings for addictive substances.

This may be because processed foods are bad for your mood and overall wellbeing, thus making you susceptible to cravings.

The benefits of cutting out sugar for people in recovery

When you follow the Paleo Diet, you are absolutely not allowed to eat processed sugar. The only sugar you are able to eat is sugars naturally occurring in fruit.

If this is the case, committing to the Paleo diet will render many benefits for health merely because you are not consuming sugar.

Even if your ability to process sugar is not impaired, going without sugar is still a massive positive. Why? Because frequent sugar intake causes you to experience mood swings and cravings for more and more sugar each day. This sugar-induced erratic mood may also mean you are more susceptible to relapse.

Some believe sugar cravings are a precursor to substance misuse, particularly for people with a history of addiction. By following a strict Paleo diet, you will alleviate blood sugar spikes, thus limiting cravings.

When insulin production is minimised by avoiding sugary foods, you also avoid the associated inflammatory response. In time, your cravings for sugar and processed fats/carbohydrates will wane, much in the same way your cravings for alcohol or drugs continues to wane as your recovery goes from strength to strength.

A typical day’s menu when following the Paleo diet

Below, we list a typical day’s menu you can expect when following the Paleo diet:

Here’s a look at what you might eat during a typical day when following the paleo diet:

Paleo diet and the brain

Addiction is considered a brain disorder. One of the central ideas of the Paleo diet is that if we are not consuming a diet rich in nutrients, our brains are simply unable to function correctly.  When our brains are not able to function correctly due to nutrient deficiency, our mental health is also likely to suffer. This makes cravings for drugs and alcohol so-much-more difficult to overcome.

The word ‘Paleo diet’ is arguably a misnomer.  People fully committed to the Paleo diet are more likely to use the term ‘Paleo lifestyle’. The Paleo lifestyle is about what you eat, how you exercise, and most importantly, who you choose to spend your time with.

Yes, there is such a thing as the Paleo community.

Joining the Paleo community is not unlike joining a 12-step mutual support group such as Alcoholics Anonymous or Narcotics Anonymous.

When you join the Paleo community, you will be able to attend local events that allow you and others to collectively follow the Paleo way of life.

For more information about the Paleo diet, check out the following useful resources: