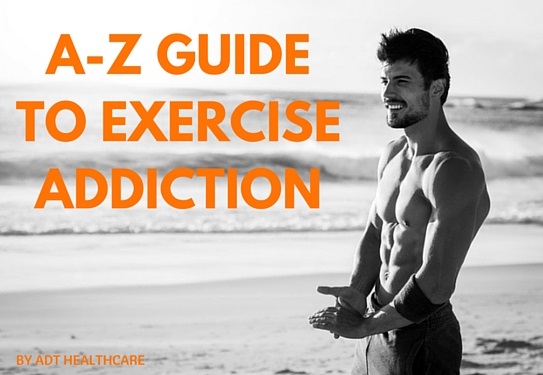 In this article, we discuss the topic of exercise addiction. Keeping fit is mostly considered a good thing in our society. In fact, keeping fit is viewed as a goal most of us should aim for. However, this ubiquitous belief often makes exercise addiction difficult to diagnosis, since many people believe that ‘all exercise’ is good.’ However, there exists a tangible ‘dark side’ to exercise, and this dark side will be the subject matter of what follows.

Below we discuss a number of topics concerning exercise addiction, but before dive into the details, we want to introduce you to Karen Jones, a 28-year-old Australian woman who suffers from exercise addict.

Each morning, Karen wakes up at 4 am and goes for a two-hour jog. Karen will run until her urges to exercises are satisfied. If her urges to exercise are not satisfied, Karen will continue to run until they are. People in Karen’s neighbourhood begin to notice her strange routine, so she drives outside the neighbourhood to avoid suspicion or being labelled as slightly odd. This routine continued despite Karen being warned by medical specialists that she could damage herself as a result of this excessive exercise routine.

Karen’s addiction to exercise makes her feel guilty. If she lies to her mother about exercising she feels guilty and if she does not exercise she feels guilty. To overcome this guilt, Karen tries to focus on issues that will distract her, such as obtaining the ‘dream’ body as a result of her exercising.

To most people out early, Karen appears to be ‘just another fitness enthusiast.’ However, Karen’s problems are not visible from the outside. This is because Karen’s addiction is classed as a ‘brain disease.’

If Karen doesn’t exercise, she scorns herself for being ‘fat and lazy.’ When Karen exercises, these negative emotions fade away and she feels a ‘kick’ not unlike taking a drug. Karen associates exercise with ‘getting high.’ Several gyms have been so concerned about Karen’s extreme exercising that she’s been told not to come back.

Once Karen twisted her ankle. Despite this injury, Karen continued to go out running for two hours each morning. Karen says the pain from running on a twisted ankle was not as great as the anxiety she suffered by not exercising. Karen claims her physical appearance is more important to her than even her psychological happiness.

Ironically, Karen has had to drop out of her university studies because of ill-health due to her over-exercising. Karen admits to being sick, but this concern is trumped by her wish to attain the body she desires. She associates being thin with being accepted by others. If she neglects her exercise, Karen believes she will become ugly and be rejected by other people because of her physical appearance.

In Karen’s opinion, she says she was always a ‘big girl’. Because of this belief, Karen developed anorexia nervosa and has been hospitalised with the illness on several occasions. Karen’s anorexia was so severe that doctors thought she was going to die. Now the anorexia has gone, people conclude she’s now better. But deep down, Karen knows this is far from the truth.

What is exercise addiction?

Exercise addiction can be described as an “unhealthy obsession with physical fitness”, despite the existence of negative consequences for engaging in this obsession. Exercise addiction is classified as a behavioural addiction, particularly when exercise becomes compulsive and causes dysfunction in the sufferer’s life.

To be considered an addiction, the behaviour in question must meet at least 3 of the following criteria as set out by the American Psychiatric Association (DSM-IV):

If your exercising means you relate to at least three of the above criteria, you may be addicted to exercise.

The science behind exercise addiction

When you engage in exercise, your brain releases neurotransmitters known as dopamine and endorphins. These are the same brain chemicals that are released when people consume drugs such as alcohol, heroin and cocaine. These drugs are collectively known as the body’s ‘feel good chemicals’.

When endorphins are released, we experience a soothing, relieving effect. Endorphins also prevent nerve cells from sending out pain signals. When you exercise, you put your body under stress. Endorphins are thus released because the body is trying to tolerate physical discomfort experienced during intensive bouts of exercise. If you increase the intensity of an exercise, the greater your endorphin response will be.

However, your body becomes tolerant to this increased secretion of endorphins. This means you must expose yourself to an ever greater volume of exercise in order to increase the desired amount of endorphins to feel ‘high’ from your exercise routines.

Signs you may be addicted to exercise

We now list a number of signs that may suggest you suffer from an addiction to exercise:

The three categories of exercise addiction

We shall now outline the three categories of exercise addiction, namely exercise bulimia and over-exercisers.

Exercise bulimia is an addiction that focuses on the ritual of exercising. These people use exercise as a way to purge their body of calories they intake through eating.

However, unlike bulimia, these people suffering from exercise bulimia feel they are getting a ‘free pass’ because they are not vomiting or using laxatives. Furthermore, friends and family members of people suffering from exercise bulimia will encourage their exercise routine and even give them titles such as ‘Superman’ or ‘superwomen.’ This is despite the fact these people are inflicting incredible harm to their body as a result of their exercise addiction.

Here are some of these dangerous symptoms associated with exercise bulimia:

Here are a few of the symptoms associated with anorexia athletica:

Many of these people increase these symptoms by failing to eat enough food to fuel their intensive exercise. The damage people may inflict on their body by engaging in intensive exercise whilst not eating enough food is enormous. This includes decreased bone density (osteoporosis), fractures, damaged blood vessels and irregular menstrual cycles.

Muscle dysmorphia is a mental disorder where the sufferer believes his or her appearance is flawed. The disorder is also known as bigorexia. Many sufferers of muscle dysmorphia have above size muscles due to a preoccupation with spending an excessive amount of time in the gym. However, despite having above-sized muscles, many of these people believe they are not sufficiently muscular and need to continue their exercising in order to increase muscle size.

Many of these people train for around 2-4 hours a day and do not allow enough time for their muscles to fully repair before returning to the gym. Over time, this invariably causes muscle damage and long-term injury. Many of these people also abuse anabolic steroids. Muscle dysmorphia may give rise to a number of mental health problems such as depression, anxiety, low self-esteem and suicidal ideation.

Getting help for exercise addiction

Unfortunately, since our society rewards those who engage in exercise, many exercise addicts will fail to see their addiction as a problem. Many may even deny that they suffer from an addiction to exercise. This state-of-affairs may complicate the treatment process and may warrant the use of professional intervention in order to convince your loved one that he or she does suffer from an addiction to exercise.

If you recognise any of the signs of exercise addiction outline above, consult a doctor or other health care professional without delay. Following this consultation, your doctor may refer you to a specialist therapist who can help you overcome your exercise addiction. If you seek treatment on a residential basis, consider investing in private rehab services. Residential treatment requires you live within a rehab centre for around 2-6 weeks whilst your treatment is dispensed. This removes you from your normal surroundings and thus reduces the risk of ‘relapse’ whilst treatment is given.

Treatment for exercise addiction requires you do not exercise for a certain period of time. This gives you enough time to identify underlying mental health issues that fuel your exercise addiction. Once these issues are identified and treated, you are recommended to exercise only under the guidance of an exercise physiologist. This specialist will help you to stick to a healthy exercise plan that does not result in relapse.