Guide to Safely Withdrawing from Benzodiazepines 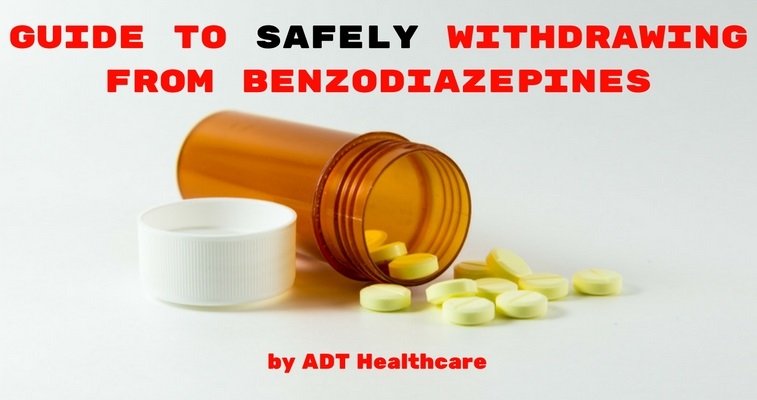 In this post, we outline how you can withdraw from benzodiazepines in a safe manner that doesn’t involve going ‘cold turkey.’ Abruptly withdrawing from benzodiazepines is dangerous and should never be attempted for those of you who are addicted to benzodiazepines. By the time you’ve finished reading this guide, you will be armed with precious information that will allow you to begin your journey to a benzodiazepine-free future. We also provide a ‘further reading’ section so you can learn more about benzodiazepine withdrawal.

The below guide is intended as mere guidance and this information should never be enacted without professional medical advice or assistance.

The science behind a benzodiazepine addiction

GABA molecules cause chloride channels to open in nerve cells. Nerve cells become more negative when chloride is allowed through. This negative charge due to an influx of chloride makes it harder for neurons to fire meaning you get fewer action potentials in neurons. Less action potential means less brain activity. This causes you to feel more relaxed, calm, sleepy and even happier.

When you continue to take benzodiazepines for an extended period of time, your brain will become accustomed to this down-regulated state causing physical dependence to benzodiazepines. When benzodiazepines are abruptly withdrawn, the brain will experience too much activity. Brain cells will hire to excess causing withdrawal symptoms such as fever, hypertension, tachycardia, seizures, tremors and anxiety. All of these symptoms are associated with too much nerve activity due to a lack of GABA inhibition.

Benzodiazepine addiction is classed as an iatrogenic illness. This means the condition is typically caused due to medical treatment for an underlying physical or mental health condition.

Long-term benzodiazepine addiction causes ‘down-regulation’ of GABA receptors located throughout the central nervous system. This occurs when the GABA receptor is absorbed back into the nerve cell axon. This means benzodiazepine addicts are no longer able to utilise the neurotransmitter GABA. This causes the addict’s central nervous system to be in a heightened state of excitability and thus unable to cope with stress.

GABA is the body’s most important inhibitory neurotransmitter. This is because GABA is used to achieve a sense of calmness and to help us get to sleep. When GABA receptors are not functional due to benzodiazepines abuse, sufferers are thus not able to experience a sense of calm when cues in their environment cause anxiety or fear. This may mean people suffering from a benzodiazepines addiction suffer from anxiety due to dysfunctional GABA receptors. These symptoms cause them to take even more benzodiazepines and the cycle of addiction becomes well established.

Furthermore, because GABA receptors are located throughout the nervous system, a host of physical symptoms occur when a person is addicted to benzodiazepines. These physical symptoms include severe muscle and joint pain, hair loss, skin disorders, hair loss and weight loss.

What is benzodiazepine withdrawal syndrome?

Benzodiazepine withdrawal syndrome is a broad term used to describe a series of symptoms that occur when a person addicted to benzodiazepines attempts to withdraw from the drug or reduce his or her dosage of benzodiazepines over time.

Benzodiazepine withdrawal syndrome gives rise to a range of mentally and physically debilitating effects. This includes seizures, hallucinations, breathing problems and cardiac arrest. These symptoms are common when the dosage of benzodiazepines is cut rapidly. However, deadly symptoms may also occur when gradual dose reduction is attempted. To avoid or minimise these deadly symptoms, withdrawal from benzodiazepines should really be attempted in a medically supervised environment where the drugs are tapered down slowly. This is particularly true where addiction to benzodiazepine has arisen.

When does benzodiazepine withdrawal syndrome occur?

Below we outline a table that roughly details how long a benzodiazepine withdrawal requires:

Many people suffer from insomnia and rebound anxiety for many months or even years after benzodiazepines were last taken, so the above table is only intended as a rough estimate. A condition known as Post Acute Withdrawal Syndrome (PAWS) may last for up to two years following initial abstinence from benzodiazepines.

Why give up benzodiazepines?

Many patients ask why they must give up benzodiazepines. They must realise that benzodiazepines are not recommended for long-term use, in the same way, other drugs such as methadone. This is because benzodiazepines cause cognitive impairments. This is particularly due to users’ inability to store long term memories when under the influence of benzodiazepines. Forgetfulness is one of the key reasons why benzodiazepines must not be taken on an ongoing basis.

Substituting one benzodiazepine for another

However, the downside to barbiturates is that they are more dangerous than benzodiazepines when an overdose is taken. This is because barbiturates work even when GABA is not present. This means addicts are more likely to suffer from respiratory failure and die when a barbiturates overdose occurs. Thus, phenobarbital use for benzodiazepine withdrawal is only recommended in a medically supervised environment.

How to taper correctly

When the dosage of benzodiazepines is reduced by 10% each day, we don’t recommend patients reduce by 10% of the initial dose each day. Instead, patients must reduce by 10% of the new dosage that results from the proceeding reduction. So if you start at 100 mg of your dosage on day 1 of your detox, you will reduce to 90 mg, and then to 81 mg (since 90mg minus 10% equals 81 mg). This means reduction steps get smaller and smaller as the weaning programme continues. Implementing small incremental steps in this fashion is vital when a weaning programme is implemented, particularly towards the end of the cycle. However, micro-reductions in dosages requires a commitment in terms of time. For instance, If you are reducing by 10% each week, to get down to a tenth of the original dose, it will take you 20 weeks to achieve this reduction.

This 10% incremental reduction is outlined in the table below.

Please note, the above dosages are purely hypothetical and for illustratory purposes only.

The time it takes to implement a weaning programme is particularly problematic when treatment takes place in an inpatient setting.

Below we list a number of non-GABA-ergic medications that are used to treat benzodiazepine withdrawal: