If you are unfit to drive a vehicle because you are taking either legal or illegal drugs, it’s simply illegal and immoral to do so.

If you are taking prescription medications and you are unsure if you should drive whilst using these drugs, we urge you to speak to your local doctor as soon as possible.

If you are stopped by police, there is a high chance you will be asked to complete a field impairment assessment if it is suspected you are under the influence of drugs, legal or otherwise.

This ‘field impairment assessment’ is comprised of a number of tests. For instance, you will be asked to walk in a straight line.  You may also be asked to take a drug test. These tests are able to detect drugs such as cocaine and marijuana.

If you fail these tests, then you will be arrested and taken to the police station. Here, you will be asked to take both a urine and blood test.

If these tests conclusively prove you have driven a vehicle whilst under the influence of drugs, you will be charged. You will then have to attend a criminal court. If it’s your first offence of this nature, it’s likely you will be fined.

From 2nd March 2015, the law on drug driving changed with the Crime and Courts Act. The old offence of driving whilst unfit through drugs under the Misuse of Drugs Act 1971 remains in place but is now rarely used as the old offence requires there to be proof of driver impairment.

Now, you will be guilty of an offence if a drug test proves you have consumed more than a certain quantity of drugs. It is thus no longer necessary for persecutors to prove ‘driving impairment’. Since the law was changed in 2015, the number of people prosecuted for drink driving in the UK has surged.

Below, we list the ‘drug drive’ limit for a variety of different illegal drugs:

Below, we list the ‘drug drive’ limit for a variety of different prescription drugs:

What if you are taking legally prescribed drugs?

It is illegal to drive a vehicle if you are taking drugs that impair your ability to drive.  This equally applies to ‘over-the-counter’ drugs that are not prescribed by your doctor.

Examples of prescription drugs that are known to impair your ability to drive a vehicle include:

However, if a drug test reveals you are using a greater quantity of these drugs than the limit listed above, you may be subject to criminal prosecution.

Penalties for drug driving in the UK

If you are convicted for drug drive offence, you could be liable to;

The fact you were prosecuted for a drug-driving offence will be recorded on your driving licence for an 11-year period. This will typically increase your insurance costs during this period.

If you cause death by dangerous driving whilst under the influence of drugs, you could receive a prison sentence of up to 14 years.

Drug driving laws in the USA

The US National Highway Traffic Safety Administration’s Drug Evaluation and Classification program (DEC) defines a drug as ‘any substance that, when taken into the human body, can impair the ability of the person to operate a vehicle safely’.

Law enforcement test for drugs by carrying out urine, blood and breath tests.

Please use the ‘infographic embed’ code we provide at the footer of this post: 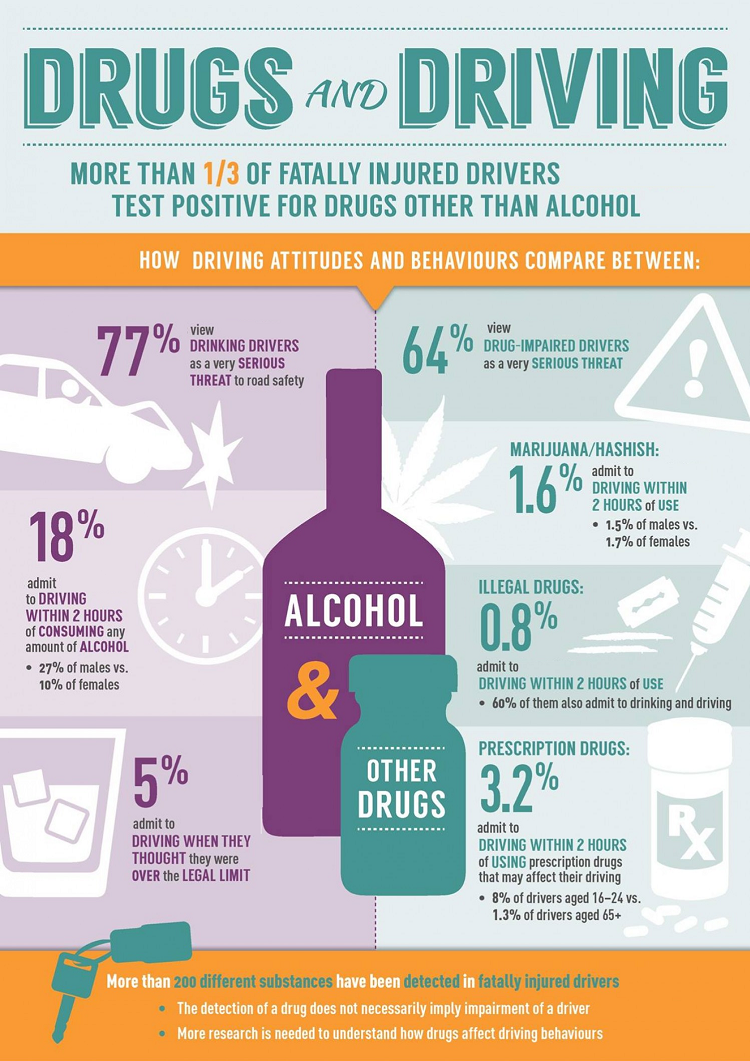